Discovering the music of the English band King Crimson was a transformative experience for me. Literally – in one, sudden, enormous mind-quake, I went from being a “standard pop harmony” person to a “12 tone” person. A single, initial listen through their 1995 album THRAK, had ripped open the doors to a hither-to undiscovered part of my brain. In it, the keys to atonality.

He likes the way I sing and wants me to audition for his band.

You know, if I was to win an OSCAR in the future, I don’t think it would feel quite as explosive as that moment. At that time, I hadn’t played any of my own gigs yet, I wasn’t a full-time musician, I had never composed for orchestra – all I had were a couple of song demos, lots of big dreams and a crummy IT job.

So receiving a call from a member of my favourite band in the world, a band I worshipped like gods… ‘completely fucking mind blowing’ is the phrase I would use. That morning, my entire universe contracted into a voice on a mobile phone.

Another 5 years later, we have a David Cross album in the can and are about to start touring. I left Dublin and a confused musical situation behind me, and flew off to spend 10 days as nothing more than the singer in the David Cross band. Gigs in London and Tokyo were imminent – Japanese Yen, tick. City guidebook, tick. Propensity for alcoholism, tick.

In the weeks leading up to the tour, I had become obsessed with trying to figure out what sort of music maker I wanted to be. Everywhere I went… while looking for a spare seat on the morning bus, stirring sweetener in coffee, watching the euro counter on the petrol pump, 3 questions went round and round my head: what was I trying to do, how were people reacting to it and was it worthwhile?

I write and arrange music on my own, so I am blessed and cursed with a vast freedom to do whatever I feel like. That’s one thing I like a lot about writing music for films – there is specific goal, there is a brief. But if you can write happily in different styles, how do you then choose the one style that you are going to stick your name to – “This music is the real me!” And I didn’t know what music that was.

In this frame of mind, off I went to London and performed as the singer (going by the name Arch Stanton [long story]) with the David Cross band for the first time, at the Royal Standard in Walthamstow. This is music that is fairly unlike my own, but at the same time, features strongly in my influences: the King Crimson song ‘Starless’, which we played, is one of my favourite songs of all time. It was a positive beginning, a satisfying night and a real step outside of my normal life. We then flew to Japan last Tuesday for a couple of weekend gigs at the stunning Asahi Hall in Asakusa. 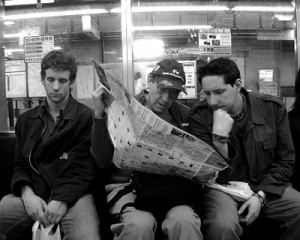 This added another level to my new location outside of everything I called normal. Apart from the obvious things, the iconographic language, the food, the shortness of the skirts, there were differences in my own personal experience. I was used to lugging around awkward keyboard cases and speakers, rushing to get gear ready, bashing out my unfamiliar tunes to small audiences, aiming to convince listeners of my worth. In Tokyo, I turned up at noon with no instrument, to prepare in a large sophisticated venue for a performance that evening, to significant numbers of fans that had adored the songs in the set for decades. Everything upside down and back to front. 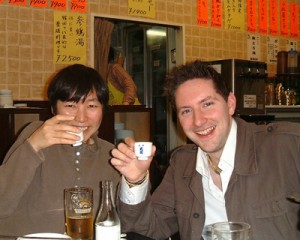 Another patronising, dumb Westerner enjoys a sake in Tokyo.

On the second night in the Asahi Hall, I started to get tearful while singing ‘Starless’. Everything from the power of the music, to the nostalgic excitement of actually performing it, reeling from dreams fulfilled and aspirations challenged, missing my girl and my little boy, it all flowed through me at that point. Luckily, there was the instrumental break, followed by a big fuck-off version of ‘Lark’s Tongues in Aspic Part II’ to afford me a good few minutes to man up again. The drummer Joe Crabtree was gracious enough to allow me to drum some additional floor tom and snare patterns during ‘Lark’s Tongues’ for that Jamie Muir/Bill Bruford double-drum effect. No room for tears there; the noise of the band was a violent, spectacular clattering.

Here’s a live clip from the night, a track called TONK.

Back home, I found myself less tightly wound up about music style. The enforced break – I never even touched a guitar for the whole 10 days – allowed me to reset my counters and begin again, without feeling I was against the clock. Living temporarily in a world where indie and punk did not exist meant I could worry less about what people might think about my stuff. It stopped me repeatedly asking myself whether I should sound more like this band or that. It also helped me decide that my little pre-trip reassessment was fine. I’m in the right place now and I’m on my way.

Your email address will not be published. Required fields are marked *